Anyone who thinks that Southern California doesn’t have seasons either hasn’t spent enough time here or just isn’t paying attention.

The difference in the fall air is palpable. It feels thinner, crisper. The morning after a rain, Los Angeles shines in dazzling technicolor.

Last Thursday I was in the middle of complimenting October on the fine job it had done to that point. Temperatures in the Coachella Valley had cooled to balmy 80s and 90s, and the mind-numbingly loud cicadas in my mesquite tree had moved on.

Then the sky went dark.

Thinking we were in for some unexpected rain, I looked west out the kitchen window toward San Jacinto Peak, the mountain just two miles away with a view that John Muir himself called, “the most sublime spectacle to be found anywhere on this earth.”

But there were no clouds. There was also no mountain. There was only dark gray nothingness. No sky, no depth of field. As my brain adjusted to what my eyes couldn’t see, I realized that I could barely make out the houses across the street.

I walked outside to lock the car. Twenty steps to the driveway, and sure enough I was wheezing when I came back in.

We were inside a haboob. 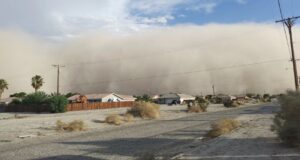 Haboobs are giant dust clouds that form when thunderstorms collapse and blow out all the wind they’ve been sucking toward them as they grow. They are most common in dry areas like the Sahara. This one formed as the result of massive thunderstorms in Northern Mexico and Yuma, Arizona. The Air Quality Index was at its maximum hazard rating of 500  – and there was more to it than just sand and topsoil.

“Sure, we’ve had ’em before,” my neighbor told me when it was safe to go outside again. “But now it’s poisonous.” Dude is retired. He owns tools and knows stuff. He votes. But his brow furrowed as he said “Things are just so dry that those winds are blowin’ the Salton Sea bed right at us.”

What’s left of the rapidly receding Salton Sea, California’s most polluted inland lake, is turning into toxic dust. The nasty mess has already caused mass die-offs of fish and birds, and local residents suffer from all sorts of respiratory problems due to airborne particulates.

Now it’s coming for the rest of us.

Every single day, our physical environment shows signs of abuse. It’s our responsibility to help heal it before it kills us all.

To learn how K-12 students are using Open-Source Learning to start community composting campaigns, monitor their gardens, and clean up the messes of previous generations, please Contact Me.