Every reference I can find for the etymology of the word technology has to do with, “art, skill, or craft.” Technique comes from the same root. Any system of making or doing requires qualities such as dedication, skill, and patience. Technique/technology may or may not involve tools.

But whenever I hear people talk about education technology, they focus on the latest software that promises to accelerate learning.

In this way, EdTech is a lot like Halloween Tech. On Halloween, people dress up as something they’re not and demand treats for their effort. We act as if the ritual is perfectly normal, because tradition. Instead of unmasking the pretenders and asking about their life choices, we ask how they made their costumes. Then we throw treats in their pillowcases, plastic pumpkins, IPOs, and crypto wallets.

Halloween is commercial. Like many American(ized) holidays, Halloween emphasizes consuming crap made of plastic, sugar, and alcohol. It’s about the celebrant. Lower your inhibitions and get crazy, yeah baby.

Apart from Ichabod Crane and the Great Pumpkin, it seems that hardly anyone knows the history of Halloween anymore.

Los Dias de los Muertos represents the unification of worlds and an evolution of celebration.

Watching the light dim and things die in nature led multiple cultures to believe that the veil between the physical world and the spiritual world is thin at this time of year. Like Beltaine and Samhain in Ireland, Los Dios de los Muertos celebrates the thinner boundary between worlds that makes it easier for the spirits to join us in celebration.

The Tech de los Muertos is designed to reveal, not to conceal. We wear costumes and build ofrendas to invite the spirits and each other into connection.

The ways we design and construct ofrendas combine pre-Hispanic Aztec rituals with more recent additions from Catholicism and popular culture. Posada didn’t draw La Catrina until the early 1900s. However, the marigolds – called cempasúchil by the Aztecs – have been calling the dead home for centuries.

The ofrendas we build, the food we make, the clothes and makeup we wear, and the music we play – these are all forms of social media, ways we bring our attention to sharing senses of belonging and meaning.

This is the ofrenda in my house: 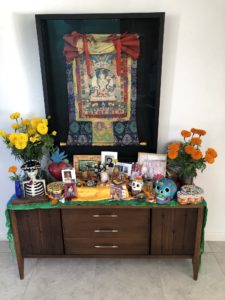 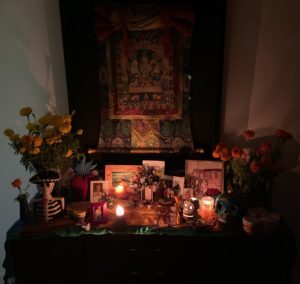 When they’re sitting in closed classrooms, students are no more connected to the off-campus community than we are to the spiritual world. Or Antarctica.

Open-Source Learning thins the veil between the learning community and the outside world. We can connect with peers, resources, and even mentors in faraway realms that were once closed to us.

The OSL tech game is bigger than the players and it’s all about integrity. When we curate our learning, we’re not dressing up as something we’re not – we are creating offerings that put ideas, skills, and people on display. To paraphrase (the spirit of) Newton, if we can see further it’s because we are standing on the shoulders of giants, many of whom are no longer with us.

Lastly, OSL – like Los Dias de los Muertos – is all about using the tools of our age to tell a story compelling enough to bring worlds together. A decade ago we used the public internet. As tools and popular culture evolved, so have we: Blogs. Mind maps. Digital whiteboards. Etherpads.

Today we are developing our own open source protocol – not a platform – because we understand this is about more than tools. It’s a process. First, we acknowledge each other and work to clarify our purpose. Then we select the right tools for the job, and we purposefully use those tools to bring our visions to life.

Students are passive, obedient players of the school game. Shuffling around with their backpacks hoping for a treat. If there is a zombie apocalypse it’s going to start in passing period hallways.

Today – every day, really – we invite the learning dead to unite in the world of the living thinkers. Join us! Explore and curate an interdisciplinary legacy that will be remembered as long as there is a server to store it.

Open-Source Learning: the EdTech of the Dead.