Going online these days is like walking through a trade show in an office building full of corporate lobbies. While you’re trying to decide where to do your business – Google, Microsoft, Apple, Amazon – banner ads and pop ups constantly compete for your attention.

I’ve heard it said that the internet is basically a series of agreements between individuals and software about how we communicate.

Well, I didn’t agree to this.

Once upon a time, you could tell a student: “I know that your teacher is a difficult person to deal with, but if you can just keep your head down, pass, and graduate, your life will be at least as good as your parents’.”

Today that statement is not supported by the facts.

A social contract is created when an individual gives up some personal freedoms in exchange for maintaining the greater good of social order. Apart from preventing anarchy, the benefits of “taking one for the team” can include:

Social contracts aren’t always complicated or controversial. Stopping at a red light may add a couple minutes to your commute, but it’s a small price to pay for not getting t-boned or run over.

Recently I asked a high school Open-Source Learning network what they knew about the Declaration of Independence. (NOTE: I should have been more specific, since there have been quite a few.)

Everyone recognized the phrase. A few rolled their eyes. One said: “We learned about that in American History.”

“Cool. What can you tell me about it?”

Nothing. Silence. No one could explain what it was. Or why it happened, or why it might be important to understand.

The Problem With User Agreements

Neither drug dealers nor software companies are transparent about their practices. Both offer products and services on one-sided terms that prospective customers are unable to negotiate.

Many of us have given up on trying. If we want to use the software, we have to scroll down and click “Accept,” so we may as well get on with it.

Most people don’t know what they’re agreeing to, because most people don’t read the agreements. In 2005, PC Pitstop temporarily added a clause to their End User License Agreement that offered $1000 to anyone who read that far and contacted them. It took five months and more than 3000 sales before anyone did.

And what recourse do we have if a company breaks their own agreement, or applies their policies unevenly? How many times have individuals, groups, and even the United States Congress complained to Facebook? (*Lots.) Has Facebook addressed these concerns? (*Nope.) Has Facebook taken steps to protect individual privacy or punish those who threaten our democracy with misinformation and violence? (*Nope.)

Our Declaration of Digital Interdependence

Students and I read the original Declaration of Independence together while we watched the news. More Facebook employees stepped forward and shared documents showing that the company hosted hate speech and illegal activity that hurts individuals and our country.

Facebook knows about our pain and profits by it without regard to what we think or how we feel. That’s not cool.

And that’s not the only example of big tech taking advantage for profit.

Rather than write a cranky blog post and leave it at that, we decided to do something about it.

Our Declaration of Digital Interdependence

The first thing we did was to read and remix the original Declaration of Independence. The text was written by the influencers of the day, and it has shown some staying power, so why recreate the wheel?

We needed to update the document for our purposes, so we used an etherpad on our own server and started editing: 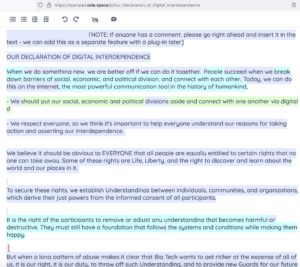 Once we were all satisfied, we e-signed it:

In our conversations, learners pointed out that their school email addresses all start with their ID numbers. Students don’t own those ID numbers. IDs are assigned upon enrollment and surrendered when students graduate, transfer, or get kicked out.

The data that students create doesn’t belong to them either. Someone else owns the servers, and that means someone else controls the fate of the data.

Learning management systems such as Canvas, student information systems such as Aeries, and feature suites such as Google Classroom or Microsoft 365 all profit handsomely off the content and metadata students create. Schools and districts buy this software. Teachers and students are directed to use it.

So, just like the colonists, we are leaving the nest and creating an alternative. We are building the Open-Source Learning Academy Protocol (OSLAP). OSLAP is a protocol, and not a platform, because OSLAP:

OSLAP began with the culture of Open-Source Learning. We have curated on the public internet for more than ten years – always on someone else’s servers. Even though we can use online software such Blogger and other platforms without paying in currency, there is always a price, starting with our lack of informed agency. We know that somewhere out there, someone may be extracting value from our work in ways we can’t see.

Last week we took an important step. After we signed our declaration, we had a meeting, and we agreed to move our data to our own servers. All of this is documented – in our data, in the recording of our conversation about our data, and ultimately in the actions we took to preserve and move our data.

Action is the ultimate authenticity. It was up to each of us to backup our blogs into .xml files that we downloaded to our machines and then uploaded to OSLAP.

I will share more about this in coming weeks. Contact Me to learn more or test-drive OSLAP with your learning community.