You’ve probably heard the old saying: “If you can’t stand the heat, get out of the kitchen.”

That idea was popularized by Harry S. Truman, who may have gotten it from a general or a judge. It’s the kind of thing you’d expect a president, general, or judge to say. It’s a challenge. A dare to rise to the occasion. Toughen up. That’s what it means to be an American. A man. An adult.

It’s easy to see why the saying has endured. It’s a brief, powerful metaphor that effectively conveys assumptions about shared values and expected behaviors.

What if the kitchen sucks?

And what if there is no alternative? Our entire planet is getting hotter. Deadly heat waves will be 3-10 times more likely by 2100. Exactly what are you going to do about it? Pack up your spaceship?

Low pay, lack of respect, and poor working conditions are just a few of the reasons that the teacher shortage in America has hit crisis levels.

Many states and school districts cannot fill positions. Unqualified people are standing in front of classrooms full of students.

And the teachers who haven’t already quit or retired early? In addition to their teaching duties, they have to fight for basic resources.

Consider for example the teachers who are on strike in Columbus, Ohio. 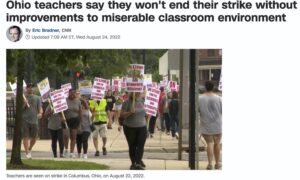 They’re not looking for Lebron money, or even enough money to buy houses near the schools where they teach.

How about just not freezing or suffering from heat exhaustion in the classroom?

As one teacher put it, “(Students) should be able to come to a safe place where there’s not rats and roaches and hot conditions… As an adult, if you go to work and it’s freezing or 98 degrees or you forgot your lunch, you’re not going to be a productive employee. And school is the same way. We can’t have kids continuing to come to buildings and not have these basic needs, and we can’t expect teachers to come work in these conditions, either.”

I Sweat From Experience

In 2006 I taught a summer school class at James Monroe High School in the Los Angeles Unified School District. The class was held in one of those portables that never moved. The temperatures outside hovered around 105. Inside was hotter. The air was stifling. The sweat trickled down your back. The flies died of heat exhaustion. I watched one stop buzzing, walk a couple steps on my desk, and keel over.

The room had an air conditioner, but the thermostat was covered by a plastic housing that was locked and could only be opened with a key. I called maintenance to ask for help. No one answered. I called the front office. They told me air conditioning costs money.

I picked the lock with a paper clip, opened the plastic cover, and turned down the air conditioning.

The next day, I arrived to find the thermostat cover closed and locked, this time with a padlock. I shattered the cover with my elbow and turned the thermostat down as far as it would go.

At that time, Monroe was one of the biggest schools in the country. 5000+ students attended on a three-track, year-round calendar. When I returned for the next track, my classroom had been moved to one of the old buildings.

Instead of a local HVAC unit with a mechanical thermostat, now I had a wall unit with an electronic thermostat that was wired into the building’s ventilation system.

I read the manufacturing labels and starting surfing the internet.

The schematics were hard to understand. I don’t know much about heating and cooling systems, and less about electronic security. But I know how to read a phone number, and I called the company’s headquarters in South Los Angeles. I spoke with a representative named Celia who taught me how to defeat the electronic thermostat lock code, reset the DIP switch, and turn my classroom into the freezer aisle at the supermarket.

Outside it was sweltering. Mind-melting. But in that room, we could now relax. Talk. Think.

If you can’t stand the heat, remodel the kitchen.

We have to change the conditions that require people to fight for a livable, learnable environment.

Then, once we manage our heating and cooling for the school year, maybe we can start stewarding our off-campus environment so the Class of 2100 has somewhere to live.