Sunday night the sky was different. 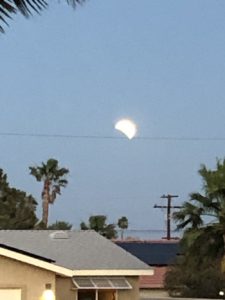 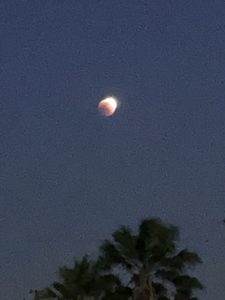 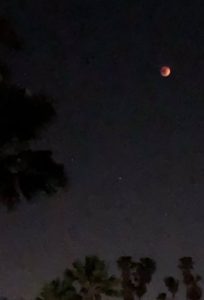 The moon was full and then it wasn’t. It got smaller and smaller, right before our eyes. Yours, mine, and everyone else’s – in that moment, everyone on the planet (who could see and chose to look) shared the experience.

Our planet moved into the path of the sun’s light on the moon like a giant shadow puppet. As the sky darkened, the shadow turned the moon red – a “blood moon.”

I’ve known all about eclipses since I was eight. I won my elementary school’s science fair as a third grader with an exhibit that demonstrated eclipse effects using a blackened cardboard box, a few styrofoam balls impaled on paper clips, and a flashlight on a switch.

Forty-four years later I was still excited to drop everything and stare up at the night sky.

As I did, I found myself wondering how ancient people might have felt as they looked up at the super flower blood moon.

No wonder we developed science and told ourselves all sorts of wild stories in the meantime.

Four out of the five fitnesses of Open-Source Learning are fairly straightforward. It’s hard to argue with the need to develop our mental, physical, civic, or technological capacities.

But introducing the fifth fitness – spiritual fitness – can be tricky. People often confuse spirituality with religion. Open-Source Learning doesn’t specifically address religion, but it does acknowledge our very basic human need to connect with something bigger than ourselves. Throughout the pandemic and the era of social media we have shared concerns about isolation and loneliness, but there have been precious few remedies for restoring our spiritual fitness.

Religion is one way people explore spirituality, but it’s not the only way. Play or rooting for team sports and volunteering gives us a sense of belonging in community. Live music gives us a shared sense of energy and emotion. And we gain valuable perspective about our tiny, fleeting place in reality when we stand in awe of an ocean, or a mountain…

or a big, red moon in a vast, ever-changing night sky.