School can be a cruel, abusive place. We greatly underestimate the commitment and care with which students try to navigate school in order to succeed.

This week on Twitter friends pinged me about the trials they endured to graduate and get on with their learning lives: 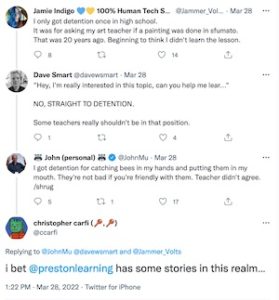 More than 5,000 students attended the high school where I taught in Los Angeles. There were hundreds of suspensions, expulsions, and arrests each year.  The Los Angeles Police Department ran a substation on campus. There was a child care center for the students’ children. The 12-foot chain link fences were topped with rolls of concertina wire.

Teachers and administrators did the best they could with the tools they had. The school hired more security and created strict new policies. Guards began to close and lock the gates at the morning bell. Late arrivals had to walk around campus and check into detention through the parking lot between the cafeteria and the gym.

Administrators believed that they could force students to get to class on time. They were wrong.

Most students didn’t have a choice about when they got to campus. Some had to take a bus that arrived long before dawn. They sat still in the dark, hoodies covering their faces. You only noticed them when the steam of their breath puffed out in the yellow parking lot lights.

Others walked, or waited for their parents to get home from work or get out of bed to drive.

I took Jeremy’s stories at face value. Then I saw his mom’s car. It was worse than I imagined. He was telling the truth. Still, school starts when it starts. After a few late arrivals in a row I reminded Jeremy that the following week they were going to start locking the gates at the bell.

Jeremy was on time for two weeks in a row.

But then I didn’t see him.

Late, yes, but absent? No. This was a first.

I asked around but no one had seen him.

When Jeremy finally showed up, all the color had drained from his face. He was quiet and withdrawn.

Jeremy sat down without taking off his jacket or his backpack. He didn’t even take his hands out of his pockets.

After class I asked Jeremy to hang out with me for a few minutes. I asked him where he’d been.

It turned out that he got caught by the new policy on the very first day. A security guard slammed the gate in Jeremy’s face and told him to go to detention.

But Jeremy wanted to get to my class. So, he walked around the corner to where the security guard couldn’t see him, just out of range of the nearest security camera, and climbed the chain link fence.

Just as Jeremy got to the top he heard a friend call his name. Jeremy got distracted and didn’t notice that his sweatshirt wasn’t covering all of the concertina wire.

Jeremy swung himself over the top of the fence and jumped down the other side to join his friend and get to class.

He felt a tug on the brand new class ring he’d just bought. Jeremy was the first in his family to graduate from high school, and the ring was a big deal. He saved for months to buy it.

When Jeremy got down from the fence, he looked at his friend.

Jeremy looked down and didn’t immediately understand what he saw. There was blood everywhere.

Suddenly a security guard ran up. Ignoring the protests from Jeremy and his friend, the guard marched them both to detention.

Jeremy never found the rest of his finger or his class ring.

The moral of the story

If you really want to help a learner, start with something simple: Get out of their way.

Discipline is not something a person does to someone else. Discipline is something we grow within ourselves. The measure of a person’s discipline is what they do when no one’s looking. The effectiveness of our education only becomes evident when we’re no longer in school.

Jeremy didn’t have a problem with motivation or discipline. He was confronted with obstacles and he did his best to overcome them.

Someday, I hope schools everywhere will adopt humane policies that reward passionate curiosity and personal integrity. Until that time, I support Jeremy and learners everywhere who have what it takes to give school the finger.