You would think that school spaces would be designed to optimize learning.

You would be wrong.

School spaces are most often lessons in how not to design for learning.

I once taught a course on organizational team building for grad students in the Anderson School of Management at UCLA. We were scheduled in an austere room in the Math Sciences building, where the desks faced the front of the room in rows. Someone had bolted them to the floor. Students couldn’t turn to face each other. I couldn’t move more than a few steps without the students twisting in their seats to see me. It’s harder to build teams when everyone is physically forced to sit still and focus on a stationary authority figure.

Of the seventeen years I taught high school, fifteen were in classrooms that were called “portables.” Those trailers may have been portable in theory, but in practice they moldered right where they stood. They never moved and they never will.

When I taught on a San Fernando Valley campus in the Los Angeles Unified School District, the outside temperature was 106 degrees Fahrenheit, the classroom air conditioner was off, and the thermostat was locked.

The first step in designing something new is admitting there were problems with what came before.

The vast majority of school architecture can be summarized in one sentence: “This classroom sucks.”

At least that’s how I put it to students when we moved into a classroom together about five years ago: 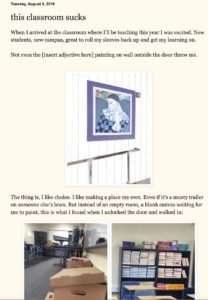 Please understand: “This classroom sucks” is not a complaint. It is an honest observation, designed to build trust by acknowledging the shared reality of our experience. It is also an invitation to solve a problem.

Building with learners is more effective than building for them. Open-Source Learning engages each participant as a partner.

With that in mind, the following principles and elements of design provide starting points for designing learning spaces: home, office, classroom, coffee shop, park, and wherever else you like to read, think, write, and create.

Here are seven ideas to keep in mind as you design:

1. The thing is not the thing 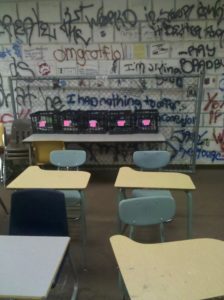 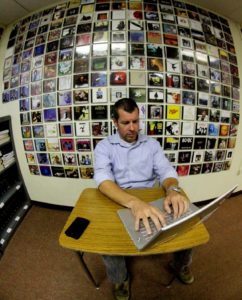 and I’ve taught in classrooms that had next to nothing on the walls. 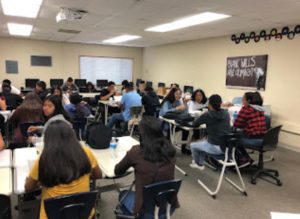 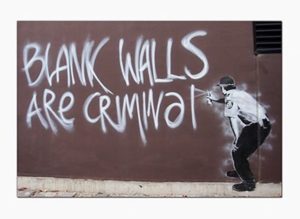 In my last classroom, I put up the Banksy “Blank walls are a crime” print because I had just moved to a different room – again – and I figured it was a cheap lesson in irony. (The 45s on the top of the wall in the picture were a gift from a student who worked as a DJ – he thought the Banksy was “boring” and wanted to look at something that reminded him of music.)

2. Lightbulbs are more than metaphors

As George Lakoff and recent politics have made clear, metaphors are important. The lightbulb symbolizes that “aha!” moment of illumination. The traditional definition of “education” is a the process through which learners move from darkened states of ignorance toward enlightenment.

But you can also learn a lot in the dark. #bats also #people

Actually, it turns out that people can be productive in both light and dark, when they know the people in charge of the lighting are paying attention.

Not surprisingly, according to recent research, “Besides improving human performance, variable lighting CCTs also exert a great influence on both the physical and mental conditions of humans… However, such benefits of lighting have not yet been fully adopted in the educational environment. At the beginning of our research, we were shocked by the fact that the lighting facilities in educational environments were much poorer than we’d anticipated.”

The fluorescent lighting in schools is unpleasant. And, depending on the color temperature and maintenance (does yours flicker?), it can have negative health effects.

If you’re in charge of the lighting where you learn, be mindful. Sunlight is nice. Tasteful, energy-sucking incandescent bulbs are nice. Those gas-discharging tubes that heat mercury vapor and come in pairs to eliminate the flicker that always seems to happen anyway? They suck.

3. Furnishing is a verb

The day I put all the desks outside.

The day I stacked all the desks in the corner.

The days I put all the desks in groups, or concentric circles, or faced them toward the back wall.

The days I replaced the desks with Swiss balls, beanbag chairs, and garage sale sofas.

4. Get your shit off my stuff.

Bertrand Russell’s conjugation (a.k.a. “emotive conjugation“) is a way of using language to characterize our own beliefs/tendencies/possessions more charitably than others’. As George Carlin put it (the title of this section links to one of his video clips), “Have you ever noticed that their stuff is shit, and your shit is stuff?”

Language and things are both elements of design that can create spacious elegance or cluttered chaos.

5. The only constant is change.

Redecorate. Paint. Get rid of some furniture. Get some new furniture.

As Emerson wrote, “A foolish consistency is the hobgoblin of little minds.” Just like considering new evidence and changing your mind hones critical thinking skills, changing up your routine – even taking a different way home or brushing your teeth with your non-dominant hand – can keep your brain in good shape and lessen your chances of dementia later in life.

Have you ever looked at a building and asked it a question: “What’s your point? Why are you here? Why do you look the way you do?”

Ask your building what it’s good at. Align the answer with the purpose/s you’re trying to accomplish.

7. Learning is a gamble.

When I taught in the classroom, I always closed the blinds.

The clock was covered with a sign that said, “It’s time.”

The single most effective behavior modification environment I’ve ever seen is the modern casino.

I wanted to increase the odds that learners would focus on ideas that didn’t have space elsewhere. When students entered my classrooms, they crossed a threshold into thinking, dreaming, wondering, and creating that – *ding!* – ended all too soon. 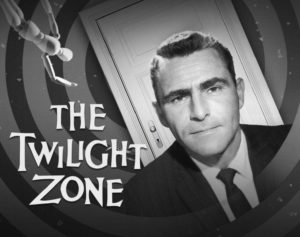 Was the design approach effective? Don’t take my word for it. Here’s how Vince Cruz put it back in 2013: 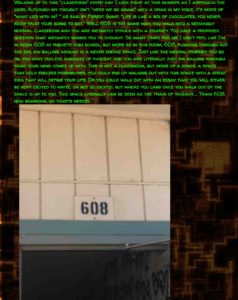 NOTE: If you’d like more specific design input or feedback on your particular learning situation, please feel free to Contact Me.

COMING UP NEXT WEEK: Acoustics for learning. (“Yeah. That sounds about right.”)