Teachers teach what they teach the way they teach because that’s how they’re trained. Teachers are hired to fulfill a specific job description, and they’re routinely threatened with dismissal and abuse if they deviate from the script.

So why do parents and politicians so often complain and attempt to change what teachers do and say?

A better question to ask is, Why can’t we all remember that what we do is only partly a function of free will, and mostly the result of what we think will get us the results we want?

As Albert Camus put it, “Fiction is the lie that tells the truth.” When we’re trying to describe or account for phenomena we can’t experience or verify with our senses, we often turn to stories and metaphors. Concrete evidence in the natural world leads straight to philosophical, abstract thought. Some of humanity’s most accomplished scientists have been the most passionate advocates for mysticism, imagination, and play.

It makes perfect sense that Hans Christian Andersen, who wrote some of our best-known fairy tales like the “The Little Mermaid” and “The Ugly Duckling,” was good friends with Hans Christian Ørsted, who discovered that electric currents create magnetic fields.

My daughter spent her first few years of speech asking questions that began with the phrase, “What if.”

What if the world was made of sushi?*

What if rocks had eyes?*

What if everyone were honest, all the time?*

(*Yes, she really did ask each of these, and hundreds more.)

So here is our thought experiment for the day: What if everyone who showed up to yell at a school board meeting actually got their way?

Just imagine every student, parent, and grandstanding state legislator effectively controlling everything teachers do and say. Then would we have peace and happiness throughout the land?

Let’s start right here: I am a teacher. What would you have me do?

This thought experiment is brought to you by my sneaking suspicion that teacher speech and conduct is not the issue. Our society is deeply divided, fearful, and unhappy. People need an outlet for their energy.

School as it stands today is a function of what people thought was important yesterday.

Somebody wants something. That’s why school is also an ongoing tug of war about what teachers can and can’t say, what curriculum should be taught, what behaviors should be tolerated or punished, and so on.

What is important to us today? Algebra? Critical thinking? Entrepreneurship? Coding?

The answers to these questions will determine what school will look like tomorrow.

I am a firm believer in the Ubuntu idea that, “I am because we are.” Every teacher – and parent, or employer/employee, entrepreneur, creative, EVERYONE – acts and produces outcomes in connection.

To the Ayn Rand fans in the room: In real life, Howard Roark is an angry, mewling little tool. Think Dilbert. No one creates alone. Everyone – EVERYONE (that’s CAPS twice in two paragraphs) – is interdependent. You’re going to sit in a room by yourself and write The Great American Novel? Terrific! Just don’t kid yourself into thinking you’re also going to manufacture the pens, pencils, paper, or electronics for it. Or that you were born with every idea for the story, or the innate talent to bring it to life. You’re going to value your worth at $45B on paper and buy free speech? Go right ahead. Just remember that your success is the result of our gambling habits.

Famous individual genius creators from Hunter S. Thompson to Bob Dylan to George Lucas all borrowed inspiration, content, and work processes from many, many sources. Today we all stand on their shoulders when we “innovate.” Rand’s/Roark’s argument that the creative, passionate individual is immune to the influence of others is a steaming pile of nonsense that appeals only to those who stopped maturing in high school.

[Fun fact: Rand’s real-life boyfriend broke up with her, apologized for promoting her closed philosophical system of Objectivism, and later became known as “the father of the self-esteem movement.”]

My belief in the value of informing and influencing each other is why I started Open-Source Learning: 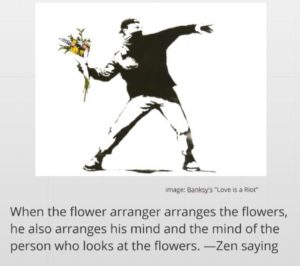 Some people get super intense about demanding our attention, and they forget to protect others’ need to be heard as well.

This may be because:

Whatever the reasons, the bullies are among us, even in the caring professions. Two of the scariest roles in movie history feature nurses: 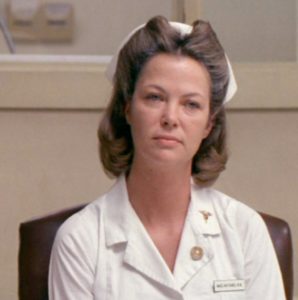 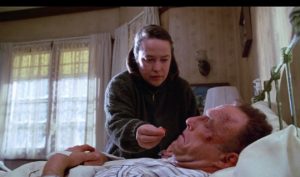 Now the thought experiment is harder. Who’s the authority? Who’s the bully?

When we’re kids, we may deal with bullies on the yard, but (with few exceptions) the teacher is the biggest dawg in the room. Many adults feel dread when they return to a campus, especially if they have to go to the principal’s office.

It’s time to stop fearing the spider. We’re bigger than that. You have an idea about what your kid’s teacher should do? Great! Think your kid’s teacher made a mistake? Awesome! Step right up and contribute – assuming you’re not pandering for votes or being cruel just to make someone feel badly, come on into the kitchen and roll up your sleeves. You’re welcome in my classroom (virtual or elsewhere) anytime.

School will continue to be a thing and teachers will continue to teach. My hope is that, with your help, school and teaching can evolve to address the needs of today’s students, instead of staying rooted in the 19th century. Open-Source Learning exists in part because I still have a hard time believing every American student doesn’t learn about the internet, over 50 years after it was invented and came to dominate every aspect of our lives.

So bring everything you have to the conversation about learning. Or, if you’re not willing, take Utah Phillips’ advice in the immortal story of the moose turd pie . To paraphrase: “MY GOD, THAT’S [SCHOOL] TURD PIE! It’s good though.”

Please feel free to Contact Me so we can continue the conversation. I promise it will leave a better taste in your mouth.