Recently I co-hosted a few Open-Source Learning chats on Clubhouse with my good friend Chris Carfi. At our last chat, we were visited by Raven, a very talented visual note taker. Here is how Raven heard/ saw/ imagined the exchange: 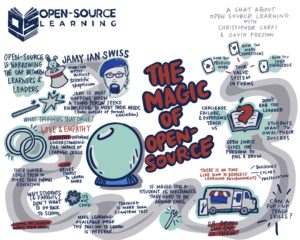 It’s one thing to spend time in the company of an artist, a master craftsman, and an uncompromising intellectual; in this conversation, Jamy takes things to a whole ‘nother level. The man is a mensch. Thanks once again to Jamy, acclaimed magician and author of The Conjurer’s Conundrum, for taking time to share his perspectives on critical thinking, scientific skepticism, and the magic of learning/ learning of magic.  We were joined by learners who work with me, Jamy’s publishers, attendees from Japan, Canada, New York, Ireland, and – in a historic first – my son’s room down the hall.

Here is the recording, followed by a timeline with links and notes. I hope you find a rabbit hole worth exploring further. If you’d like to contribute an idea or a resource, or if you’d like more examples and links to the coursework I do with learners on the public internet, please Contact me – I look forward to continuing the conversation.

Before the webinar even started, Jamy dived right in and we discussed a few things worth sharing:

From here on, the notes and links correspond to the timing in the recording. Enjoy!

00:05 The publishers of Jamy‘s new book, The Conjurer’s Conundrum

03:59 “All Along the Watchtower” performed by Jimi Hendrix (to illustrate Jamy’s point by comparison, here’s the original version by Bob Dylan)

11:16 From The Conjurer’s Conundrum: story of the white owl exhibition by Mark Wilson

15:04 “The audience needs something, the audience is seeking something. And if I give them what they need, and I have a little patience…”

17:04 Karl Germain: “The conjurer is the most honest of professionals.”

17:25 James “The Amazing” Randi / “In many ways, the founder of the American skepticism movement.”

19:52 “It’s the awareness that what’s being done is impossible. That makes magic interesting, compelling, engaging memorable, because it violates people’s knowledge and experience. It creates that cognitive dissonance, what my friend Whit Haydn calls a burr under the saddle of the mind.”

21:42 “Neuro-linguistic programming is merely a self promoting self-sustaining industry that has absolutely no substantial science to support it.”

24:40 “The scientific skepticism movement is basically a pro science movement.”

28:43 “Magicians have crossed paths with issues of critical thinking and rational inquiry – and promoting that – for at least 400 years in the literature.”

28:58 First book written in English about magic: The Discoverie of Witchcraft by Reginald Scot, 1584

43:06 Jamy’s sword of social justice was forged as a student activist, beginning as a trick-or-treater for UNICEF when he attended the Woodward School in Brooklyn. Jamy would go on to help close his high school twice and take over his college.

48:06 Robert Kennedy: “There are those who look at the way things are and ask why… I dream of things that never were, and ask: ‘Why not?'”

48:45 Edward Tufte (Jamy – the only person to co-author one of Tufte’s books – co-authored the chapter “Explaining Magic” in Tufte’s book, Visual Explanations published by Graphics Press)

57:31 Jamy talks to a UX/UI audience about empathy

1:04:16 Mistakes Were Made But Not By Me: Why We Justify Foolish Decisions, Bad Decisions, and Hurtful Acts by Carol Tavris

1:10:39 Ernest Hemingway on evaluating the credibility of sources of information: “The most essential gift for a good writer is a built-in, shockproof, shit detector.”

1:10:56 Demon Haunted World: Science as a Candle in the Dark by Carl Sagan

1:16:01 Marshall McLuhan: “Anyone who tries to make a distinction between education and entertainment doesn’t know the first thing about either.”

I’m excited to present an opportunity to learn from Jamy Ian Swiss, author of The Conjurer’s Conundrum.

On May 18 at 2:00pm PDT, Jamy will join me for a webinar featuring empathy, honest deception, critical thinking, and scientific skepticism. There is space for 100 attendees, and you can register by clicking HERE. You can also read more about the event and Jamy below. If you’d like to contribute questions in advance, please send them along, and if you have a schedule conflict, don’t worry – let me know and I’ll send you a link in coming weeks with the recording and annotated notes. Hope you can join us!

JAMY IAN SWISS ON CRITICAL THINKING, SCIENTIFIC SKEPTICISM, AND THE MAGIC OF LEARNING

As Marshall McLuhan famously observed, “Anyone who tries to make a meaningful distinction between education and entertainment doesn’t know a thing about either.”

Jamy Ian Swiss is living proof. The author of The Conjurer’s Conundrum, Jamy is a world-class magician who has appeared on Brain Games and The Late Late Show. Jamy has consulted for Neil Gaman, Amanda Palmer, and Penn & Teller, among others. He has also performed at the Smithsonian Institution, The Magic Castle in Los Angeles, and he created Monday Night Magic, the longest running off-Broadway magic show in New York City.

These are impressive credentials, but there is more here than meets the eye. According to Jamy, most magicians fall in love with magic somewhere around 7-10 years old. Of course, lots of people fall in love with lots of things around that age, but the magicians are the ones who stick with it.

Some magicians become skilled practitioners; and within the community of practicing magicians, there is an even smaller group, comprised of those who seek the inner circle. These are the magicians who embrace the practical demands, historical legacy, and culture of magic entirely. When you learn about the lives and practices of people like Ricky Jay or Richard Turner, among others, you realize that magicians are some of the most dedicated learners and teachers in human history.

Anyone who tries to make a meaningful distinction between education and entertainment doesn’t know a thing about either. -Marshall McLuhan

I’ve often said that learning is magic. It is equally true that magic is learning.

The practice and history of magic also carries some important lessons for us in today’s world. As Jamy writes in The Conjurer’s Conundrum, “We can all be fooled.”

Card tricks and sleight of hand are undeniable reminders that we don’t know what we don’t see. As one of my students put it in Academy of One, “Magic is like that. You think you’re paying attention to something, and then you realize that you’re not really getting the whole picture. Your mind talks you into believing what you’re seeing. It’s like when you’re walking on stairs in the dark, and you think there’s another stair. But you take the step and there’s nothing there; your foot finds only empty space, or the floor jumps up and trips you.”

Please join Jamy and me for a conversation about learning, critical thinking, deception and delusion, scientific skepticism, and rational inquiry. Register HERE.